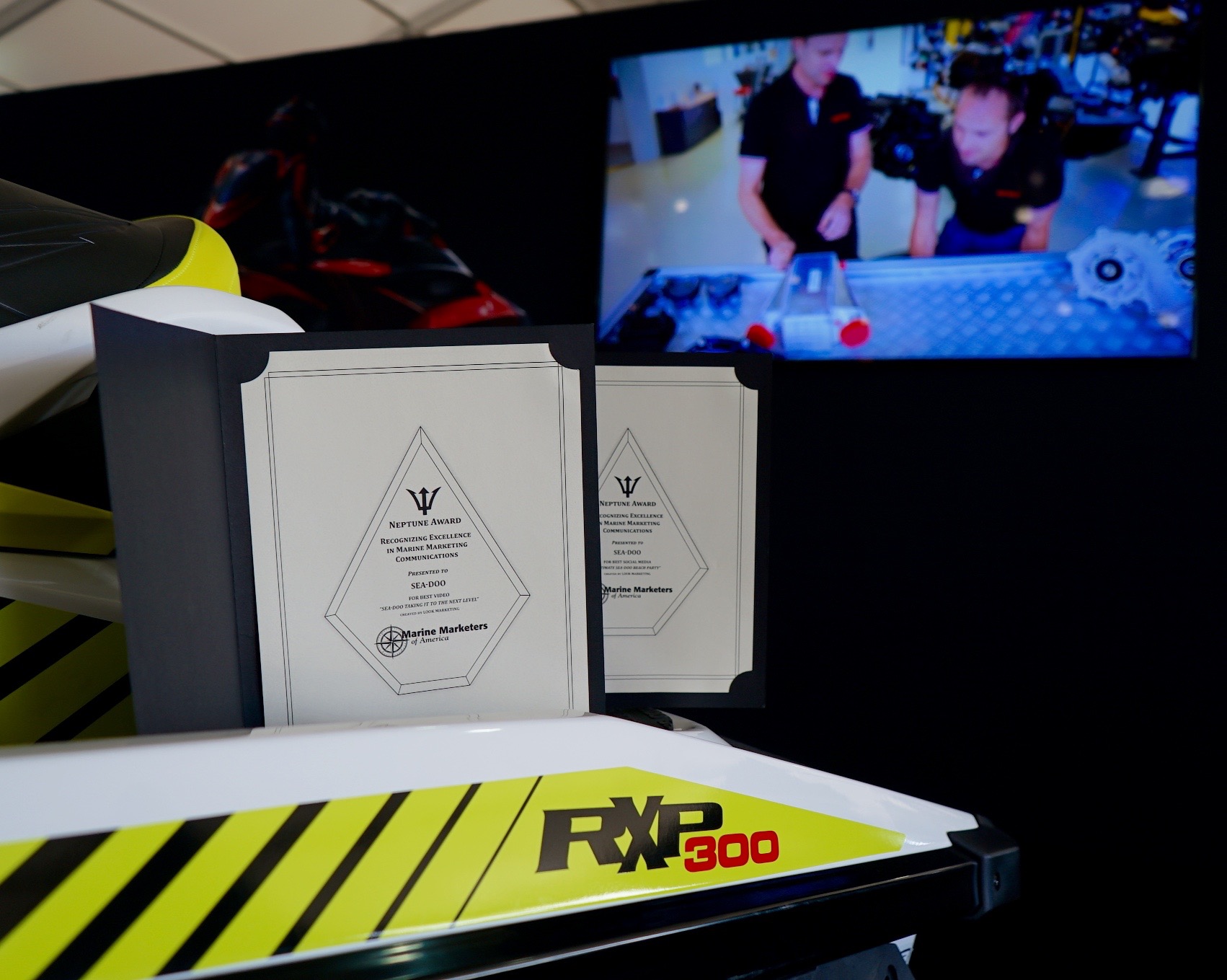 Miami, Florida – LOOK Marketing was honored by the Marine Marketers of America with two Neptune Awards for Best Video and Best Social Media of 2015 in the $50 billion marine industry.  The Neptune Awards were presented to LOOK in front of the elite of the marine industry at the NMMA Industry Breakfast to begin the Miami International Boat Show. These are the second and third Neptune Awards won by LOOK marketing for their work with the Sea-Doo Watercraft brand.

LOOK, in collaboration with Fiction, brings ultra targeted creative to BRP that tells the Sea-Doo story in a manner that talks directly to the intended audience. This explains the science behind the NEXT LEVEL of performance watercraft riding fun.

We focused on key messages to build video assets that complimented the overall promotional effort. We looked at how we can produce videos that connect and drive launch and promotional efforts such as; press intro, dealer meeting, boat shows, special events, dealer showrooms, social channels, but most importantly to the online, video watching consumer.

The Science of Fun

From design, to testing, to production, to the on-water experience – this concept is motion graphics driven and tracks linearly from the concept phase through to the user experience – reading like a modern blueprint.

We focus on the people that bring their passion for product progression to the job everyday. We focus on the science behind their work and how the new technologies come to life for a better product experience.

The overlaying motion graphics evolve from the science to the user experience. There it highlights aspects of the fun being had in the same execution, with the same scientific look at the rider experience – like an objective study of the machine itself and the payoff, the fun.

This video series lays the foundation providing the PROOF of why to believe these new models are BETTER.

This campaign was developed and executed in partnership with Cramer-Krasselt. We asked fans to, “Show Us How You #SPARKSOMEFUN” to win the Ultimate Sea-Doo Beach Party that would be filmed by YouTube star videographer Devin Super Tramp intended to create something to talk about and promote – a share-of-voice tool for the Sea-Doo SPARK and full line of Sea-Doo models leading into the selling season. The effort must have a “hook” element for media and consumers and should be integrated across multiple mediums to maximize limited budget.

Among nearly 100 entires from the biggest brands and agencies in the marine industry, these two entries from Melbourne, Florida based LOOK Marketing were chosen as the best. #BESEEN